Therapy and counseling from expert doctors and therapists. 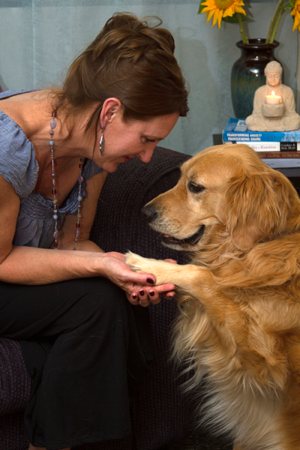 Two years ago my husband and I adopted a sweet and loving Golden Retriever named Theo. As I became very curious about some of his behavior, I realized that it resonated deeply with my clinical work, and how both dogs and humans possess the innate ability to naturally create our own internal wellness.

SE trusts the organic intelligence of the body to release stored trauma energy and reestablish the body's inherent sense of safety and capacity to connect.

I'm no dog expert, but Theo has shown me three specific things that have given me tremendous insight into the fundamentals of treating trauma.

Dogs and humans share the same basic nervous system which has evolved from more simple, primitive systems. To simplify, we have two basic systems that work as a team to keep us prepared and regulated:

It is essential to be able to mobilize energy for a threatening event, but it's intended to be temporary state, so it's also necessary for a nervous system to be able to recover from that stressful situation once it has passed.

The body (dog or human) doesn't know the difference between "good" or "bad" activation; it just has a sense of "too much", which left unrestricted, can be pretty uncomfortable. When Theo gets excited (whether it be in a "good" or "bad" way) and reaches his activation threshold, his answer to the sense of "too much" is to look for the nearest stuffed toy, bone, or other symbol of comfort and carry it around until he calms down.

It’s his way of self-regulating and self-soothing, thus returning his activation level into his comfort zone. As humans, we also do this through an assortment of means, some healthier than others. For a traumatized system, however, this ability may be diminished or completely unavailable. One goal of SE treatment is to re-train the system how to naturally regulate without becoming overwhelmed.

When Theo encounters an overwhelming situation in the form of a car ride or another dog, once distanced from the stressor he takes a minute, regroups, shakes it off, and happily goes about his dog business, unscathed.

Humans, also, have this instinct. Shaking, while perhaps not the wholehearted, fur-flying kind, is one of the body’s organic ways of discharging the intense energy that is called up when our systems tell us that Fight / Flight should become mobilized.

Shaking functions as a sort of release valve:

Shaking functions as a sort of release valve. Recall your most recent highly charged experience: an accident, a close-call, or a triggering confrontation. It's likely that after the threat had passed, you shook, or felt the impulse to. When Theo shakes it off, he doesn't necessarily make a cognizant decision to do so; his natural impulse is just to shake.

With humans, it gets a little more convoluted:

By inhibiting that organic process, we risk caging the intense Fight / Flight energy in the body, where it gets stuck. An excess of this energy can manifest in numerous ways, causing physical, emotional, and mental disturbances. Stress, depression, anxiety, dissociation, physical pain and illnesses can all have their origin in stored trauma energy. SE techniques gradually allow the trapped trauma energy to release, thus making more space in the system for natural balance and wholeness.

When Theo is happy, he wants to share that with us. When he’s scared, he presses against us for the reassurance that we are accessible to one another. We are his pack.

We are hard-wired to depend on others for physical and emotional support. This sense of connection can be disrupted in a traumatized system; this is why isolation and withdrawal are common trauma symptoms.

SE views this as a reflection of the distress and disconnection within our own systems; if our bodies feel chaotic or unsafe, it would make sense that we would feel unsafe in the world as well.

This is remedied by establishing a sense of safety within the body. As we become acquainted with our sensations and feelings and gain skills in how to regulate them, more space is created in the system and our ability to connect in an authentic way is restored.